The TC Cars Solihull Barons earned a convincing win on Sunday against the Nottingham Lions however ill will towards the end of the game resulted in a messy end to the tie.

Two hours earlier however the Barons wasted no time getting a score on the board with Ed Eaton slotting in from square in front of goal after a first five minutes played almost exclusively in the Lions end. By nine minutes the Barons had doubled the lead with Dan Harrison finding the net after cycling of the puck by the Barons line opened gaps in the Lions defence. As the period wore on so too did the physicality, Rich Crowe and Callum Metcalf tangling, while Daniel Harrison threw the sort of hip check to bring back memories of former Hobs Moat favourite Phil Lee. A Barons powerplay at the period end was fully exploited to give Solihull a 3-0 lead by period end, Niklas Ottosson hitting the netting with a laser from the blue line.

Into the second and Solihull rapidly extended their lead further with a pair of goals in the 23rd minute. First Elliott Farrell lifted the puck over the butterflied pads of Miles Finney before Matt Maurice poked the rubber into the net from just outside the crease shortly after. The Lions had a few chances of their own and found themselves on the scoresheet soon after as Thomas Palmer made the most of a powerplay opportunity. By the half hour mark Solihull had once more opened up their cushion with a well worked goal through the full line before being finished by Matt Maurice. Nottingham however also took their more limited chances well and when a 2 on 0 break offered itself, Ruskin Hughes made no mistakes in converting. This was Solihull ice however and by the 40 minute mark the Barons had found the net once more, Stephen Heape with a poke in on the right hand post.

The final period would be marred penalties resulting in a controversial end to the tie. Within the first couple of minutes the modestly sized Baron Dave Rogers gave away considerable hight and reach in a straightforward bit of fisticuffs with the lanky Ruslan Cernych. The only goal of the final twenty came mid-period, man of the match Daniel Harrison with a deft shot from the right hand circle for Solihull’s number eight. With five minutes to go however the game became increasingly ugly with a line brawl followed by scuffles around the bench area before the game was called done.

Next Saturday the Barons make the difficult trip to Ice Sheffield to take on the always well-drilled Steeldogs. On Sunday it is Solihull who will play host to the Steeldogs, the Sutton Sting who will be sure to put in a competitive performance, Face-off : 6:00pm. 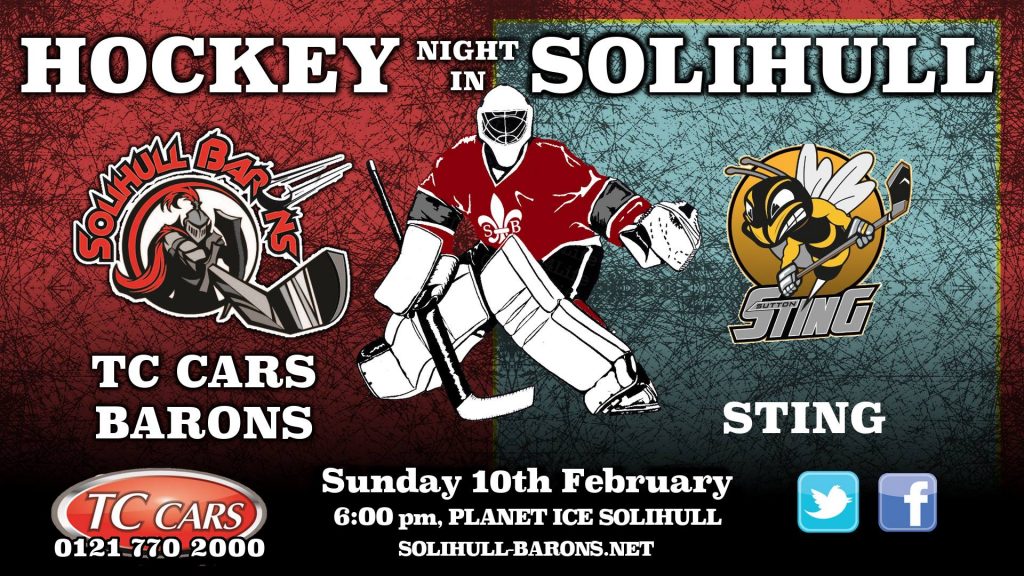 Free Skate for all after game !!!