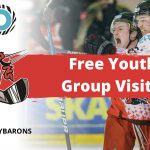 The Zoo Accounting Solihull Barons are pleased to continue to offer chances of match night out for youth groups who would like to join us for free at any of our remaining home ties this season.

If you know of any Scout, Cub, sports or other similar youth groups who might fancy an exciting Sunday evening out at the Barons please ask them to contact us on “solihullbarons@gmail.com” to book a game.

Hope to see you there ! #COYB 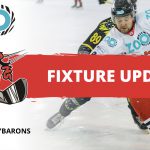 We have through some details of fixture updates related to away ties at Deeside and Widnes.

The Deeside tie originally scheduled for 20th November but which was postponed due to the Dragons rink not being returned to playing condition will now occur as follows:

The Widnes tie scheduled for 11th February has been postponed as a result of ice at the Wild being used for an international fixture. It will now occur as follows:

We unfortunately are unable to update you at this stage in relation to the home tie against Nottingham originally scheduled for the 15th of January but will advise you on this as soon as we can. 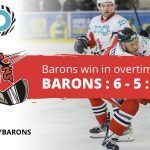 The Zoo Accounting Solihull Barons rounded off a weekend of home games with an overtime win in a tie against the Widnes Wild which ebbed and flowed and fully entertained over its entire 64 minute duration.

The Barons were quickest to get a mark on the scoresheet with Dan Mulcahy netting after little over 30 seconds of the puck drop. By three minutes in the Barons had doubled the lead, Niklas Ottosson with a lovely effort this time. Matt Maurice joined the scoring party a little beyond the mid-period mark and to the casual viewer it looked like the Barons were starting to run away with things. More here