The Direct Taxis Solihull Barons were edged out on Sunday evening by a determined, disciplined and focussed Widnes Wild squad who secured their place in the knock out phase of the Moralee cup with the win.

The Barons were on the scoreboard within 2 minutes as a shot from the left hand point was only part caught by Wild goalie Evan Coles before rolling over his glove and into the Widnes net. The lead doubled after seven minutes when Callum Bowley netted after some close in cross crease play and rebounds created the space on Coles’ glove-side for the finish. Five minutes later and it clicked again for the Barons as Dan Mulcahy rounded the back of the Widnes ice before finding James Smith in the slot, who didn’t need too much of an ask to finish. By period end the Wild had however managed to pull two goals back as Liam Charnock on the powerplay slotted the puck round Sam Hewit’s right leg for the visitors opener with two and a half minutes to go and the Solihull lead was thinned to a single goal as Charnock secured the Wild’s second in a similar fashion.

A minute into the second and the sides were all square, the Wild breaking quickly into the Barons end before Vlads Vulkanovs found the equaliser. The 3-3 scoreline was however shortlived, with Ash Calvert prodding Solihull back into the lead a minute later. The goals were coming thick and fast and Richard Haggar brought the sides level again as he found the puck first in a goal mouth scramble. The middle of the period calmed on the scoring front – the play generally being in the Widnes end but the Barons having to regroup quickly to respond to the Wild regularly countering. With 8 minutes left of the second Dan Harrison edged the Barons ahead once more, a shot from the blue line going past a heavily screened Coles for Solihull’s fifth of the night. The Barons ran into penalty problems by the end of the period and as these were being run down a drop pass from Vulkanovs fell to an advancing Kieran Beach who fired home for the Widnes equaliser.

The Wild would go into the lead for the first time in the evening with 7 minutes of the third gone as Richard Haggar stole the puck from the Barons in his own end before racing up the ice for Widnes number 6. With less than 30 seconds on the clock the Wild assured the win with an empty net goal, Charnock making the play into the Barons end before tapping home.

The Barons are now facing a busy spell with three double header weekends in a row coming up. On Saturday they head up to Solway to take on the Sharks in a league tie before stopping off in Widnes on the way back down to pay a return visit to the Wild for a cup game on the Sunday. Any supporters wishing to make it up to Cheshire for the Wild game are advised to buy their tickets in advance via the Wild Website as the team has a healthy support in a rink with limited capacity and so do sell-out.

The following weekend has the Barons taking to the ice in Sheffield to take on the Scimitars in a league match on the Saturday. The Sunday sees Solihull back on Hobs Moat ice for what will be their final Moralee Cup round robin game, when they take on the Hawks. Face-off 5:30pm.

Elsewhere in the League this Weekend 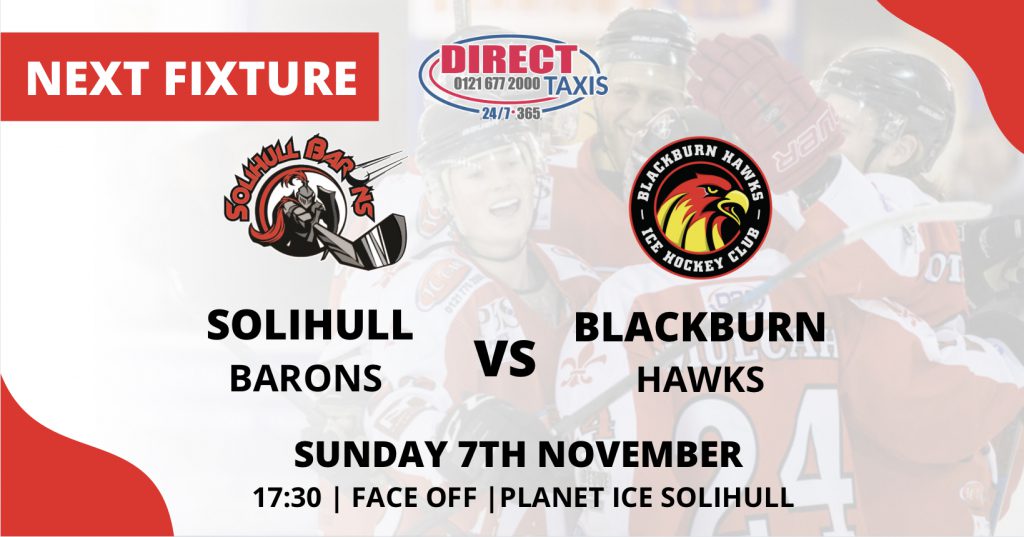