The Airport Placements Limited Solihull Barons concluded their 2016-17 campaign with a highly creditable performance in their Moralee Conference play-off semi-finals held at Ice Sheffield over the past weekend.

Going into Saturday’s semi-final tie, the fourth ranked Barons were drawn against top seed and league winners, the Solway Sharks. The Barons had struggled against the Sharks all season, failing to earn a single point and amassing only five goals over the four encounters, giving a form book sided toward the Scottish side.

The Barons however stepped onto the ice with a clear vision, taking the game to the champions and would be first on the scoresheet – Josh Bruce slotting the puck home in the 17th minute. Solihull’s lead would however only last for a matter of seconds as the Sharks Kim Miettinen evened things up shortly after the restart.

The Barons restored their lead shortly after the second period puck drop, Andy Whitehouse this time finding space in the Sharks defences. Meanwhile at the other end of the ice Solihull goalie Josh Nicholls was performing heroics, frustrating the Solway forwards and preserving the Barons narrow lead into the third period.

The Sharks restored the balance via captain Struan Tonnar in the 47th minute and despite valiant efforts by both sides, the score remained tied at 2-2 as the clock ticked down on regulation time, setting up a period of 3 on 3 sudden death overtime.

Sadly for the Barons travelling support, the Sharks made the most of the extra space getting the winning goal, via Duncan Speirs a minute into overtime, sending Solway to the final and ending the Barons season after a very strong final showing.

The Sharks went on to face Billingham Stars in Sunday’s final, emerging 3-1 victors and allowing them to complete the league and play-off double.

The Barons have their end of season awards on 29th April as their final event of the season with work already beginning to prepare for the 2017-18 season scheduled to start in the first weekend of September. 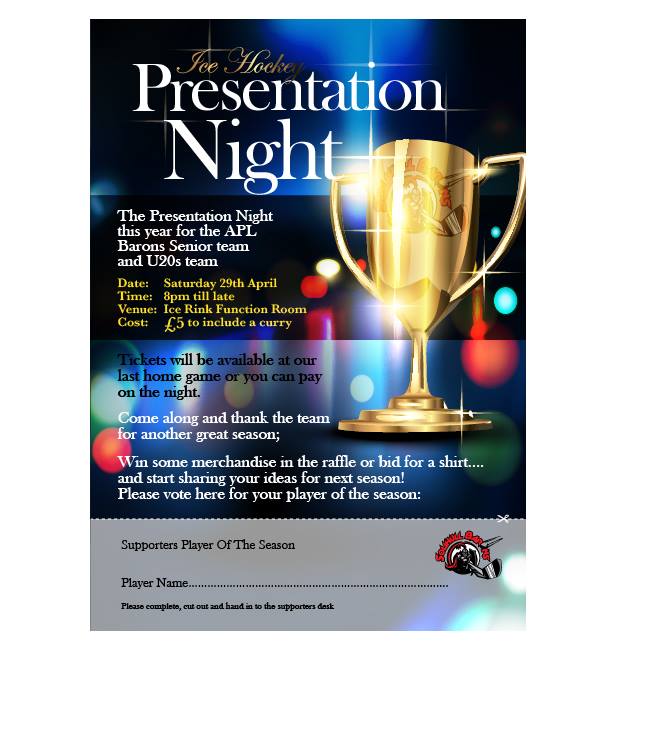