In what would prove to be a very fast paced first period the Barons game got off to a dissappointing start as they found themselves a goal down within the first minute as James Spurr for the Steeldogs shot past Danny Brittle in the Barons net. By six minutes the home side levelled as Ed Eaton passed the puck to a charging Elliot Farrell for the Barons first goal of the new season. After an interlude on nine minutes as the Barons changed to their away shirts due to the two sides initially both icing in white home jerseys the play got back underway and the Barons pushed into the lead, Matt Maurice, from behind the net feeding Josh Bruce for Solihull’s second. The lead would hold to the last couple of minutes of the period before Adrian Palak capitalised on a powerplay chance to draw the sides level once more.

The pace continued into the second period and it was the visitors who would find the net first as Palak went through the Barons defence for his second and the Steeldogs third goal of the night. Just after the game midpoint Niklas Ottosson brought things level once more, the Barons forward taking the puck up the right wing before cutting into the centre for Solihull’s third goal. The remainder of the period saw the two sides but there were to be no more goals.

The final period gave the first two goal buffer of the entire game as Sheffield players Ashley Calvert and Tim Smith both found the net, the latter making the most of a 5 on 3 powerplay to get what would turn out to be the game-winning goal. The Barons and their vocal support would be buoyed by a Luke Brittle score with five minutes to go but despite some frantic play the clock ticked down before an equaliser could be found.

The Barons now face a weekend on the road. On Saturday they take the trip to Hull to take on many people’s preseason title favourites, the ex-EPL Pirates, while on the Sunday they meet up with old rivals the Dragons at their Flintshire rink. The TC Cars Solihull Barons are once more on home territory the following weekend as the welcome the Telford Tigers to Silverblades Solihull, Face-off 6:00pm Sunday. 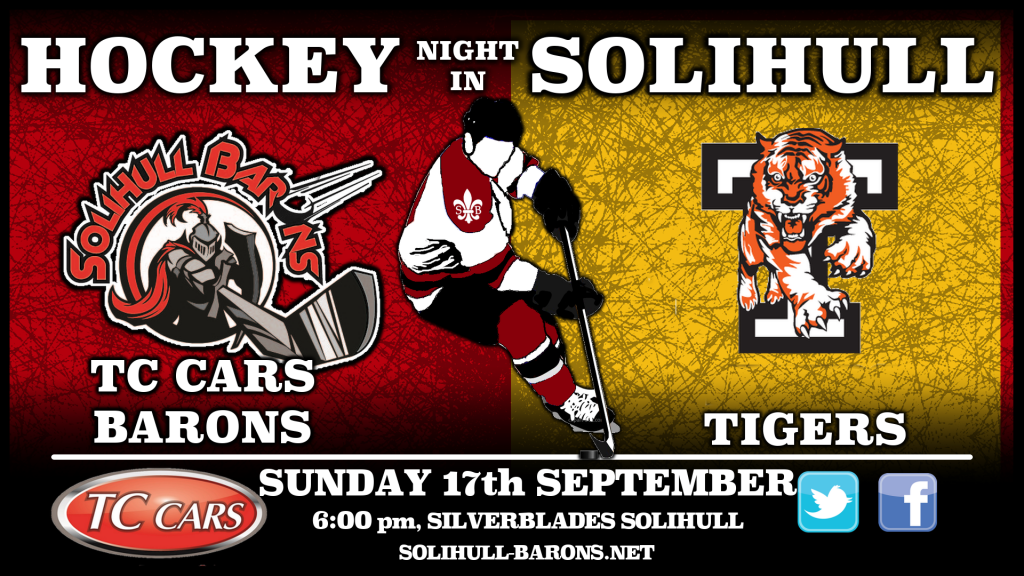