After a very tight vote, the TC Cars Solihull Barons are delighted to announce that your Supporters’ Player of the Year is the man between the pipes, Sam Hewitt.

Very much the Barons number one goalie over the past season, Sam has been a Hobs Moat favourite for well over a decade. After what was arguably a career best season, it was little surprise to see Sam’s name top the poll this year. His strong performances and calmness in the crease kept the Barons in a number of games even when short benches or penalties had tilted the ice toward his net.

Sam himself was thrilled to pick up the award :

“Thank you to everyone who voted and I hope that all Barons fans are staying safe throughout this tough time.

“This season for me has been one of the best at Solihull, the atmosphere in the changing room has never been more positive and as a club we proved that we can compete with the top teams for silverware. Not many teams go up to Solway and Whitley Bay, and stay within 1 goal difference throughout the game, or even take the lead and manage to hold it for most of the game.

”There have been lots of highs for me personally, however the game which stands out to me was away in Whitley Bay. We went 1-0 up very early on in the game and as a team we managed to hold the lead until the second period. At the end of the game we had faced 60+ shots, which is over double the amount of shots that we normally face.

“Even though we had our high’s, we also had our lows. I have never know a team to have so many injuries in one season. Within a matter of a weeks we went from having a full squad, to having 11 players that were fit to play. This did cost us massively in the league where we dropped valuable points against teams we needed to beat. Overall though it was a great season for us.

“Finally, thank you to all the off-ice staff who constantly work hard behind the scenes to make our jobs easier on the ice.

“I hope everyone enjoys the summer and stay safe!

A big thank-you to all of those who took part in the poll and stay tuned for more Barons news soon !!!

The TC Cars Solihull Barons are delighted to announce that this years winner of the Rob Eley Endeavour award is every Barons fan’s favourite Swede, Niklas Ottosson. Originally slated to take a year out, Niklas could not keep away from Hobs Moat and by October was lacing his up skates once more for another season where he would be the key playmaker on the Barons top forward line and pick up an average of three points a game.

The award is a personal award given out by Barons legend Rob Eley to the player he feels best embodies what it means to be a Baron.

Commenting on his decision Rob stated :

“Firstly I hope all the Barons’ players, staff and supporters are well and coping with the current restrictions as well as possible.

“Due to the nature of this team, there were several candidates, but one player stood out encompassing the spirit of this award.

“Niklas Ottosson is well known for his speed and high skill level throughout the league but sometimes his other attributes can be overlooked. Nik has chipped in with plenty of important goals and the number of assists speak for themselves. However his stats are only part of the story this season.

“Nik’s notoriety throughout the league means he gets very little time and space, with some opposition players targeting him for special treatment. He’s learnt to look after himself and had to play more physical this year. In fact Nik works as hard if not harder than anyone on the team, he leads by example and although not the captain or assistant he has shown leadership both on and off the ice.

“Nik is a natural forward but on many occasions has selflessly dropped back to play on defence to help the team, when we have been short in that department. His tireless penalty killing, blocking shots and forcing turnovers go mostly unnoticed outside of the team.

“What’s most remarkable is that he has achieved all of this whilst nursing a knee injury throughout the season. Therefore Niklas Ottosson is this season’s winner of the Endeavour award, hopefully with the early end to the season and the enforced time away from hockey, Nik can come back fitter and stronger next season.

Niklas himself was also delighted with the honour :

“I will start with saying that it is an honour to receive this award. I remember when I moved to England and signed for the Barons. The plan was to play one season over here and then move back to Sweden and now I’ve just finished my 6th season with the barons. Can’t thank everyone in and around the team enough for everything they’ve done for me here. Without them I wouldn’t have stayed here for so long. I’ve met some quality players and every year we have had a great bunch of lads.

“Hope to see you all soon.

Stay tuned over the next day or two when we finally reveal your Supporters’ Player of the 2019-29 season !!! 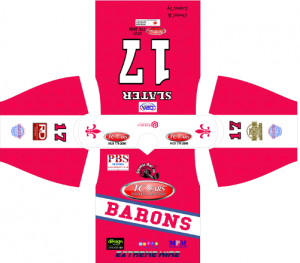 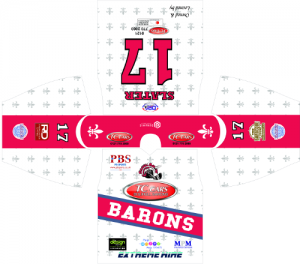 Hi Barons fans, especially those of you who supported the TC Cars Solihull Barons who purchased Own and Loan shirts last season. Your support is much appreciated as the opportunity for the Barons to have new shirts each year means we can recognise our sponsors whilst ensuring the team always looks the part out on the ice.

We have had a few queries about when you will be getting your shirts. As you will appreciate the restrictions around the COVID-19 pandemic is giving us a few challenges. Rest assured your shirts are being safely stored at this time but given the current social distancing measures we are not in a position to get them to you at this present time.

Our plan is to wait until such time that we can arrange an event where you will be able to receive your shirts from the player you sponsored and this is likely to part of a meet the players for the start of next season and I will provide an update on this when there are changes to the social distancing rules.

In the meantime we will, over the next few weeks, be publishing your own personal Own & Loan Certificate of Authentication on the Own & Loan page of the Barons website as per the example below. 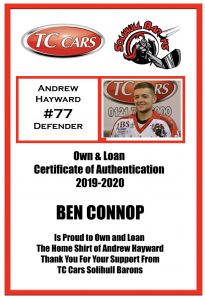 If you have any queries about this, please email the Barons at solihullbarons@gmail.com .