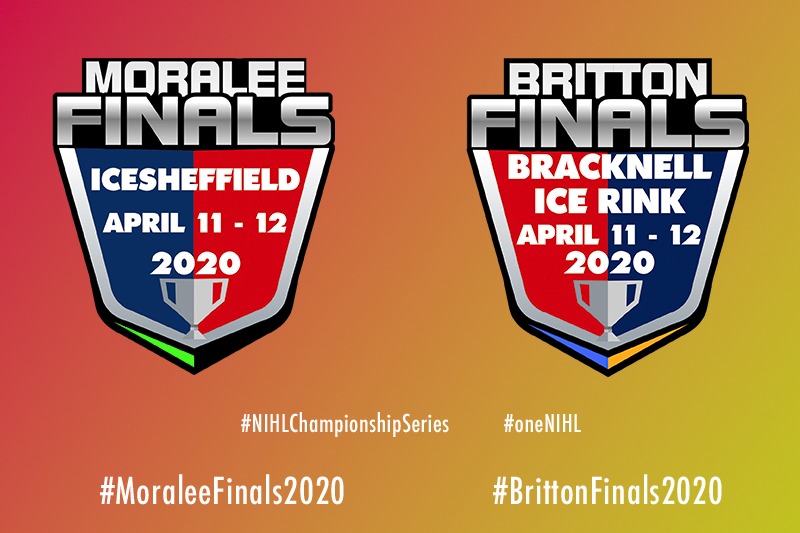 The NIHL League Management are pleased to announce the ticket information for the Moralee and Britton Finals, the playoff competitions for NIHL Division 1 North and South.

The Finals take place over the weekend of April 11 & 12, with Moralee Finals returning to Ice Sheffield, and Bracknell Ice Rink hosting for a third successive year, this time stepping up to host Britton Finals.

Tickets for both events will go on sale this Friday, February 14.

Ice Sheffield will welcome teams from NIHL North 1 for the Moralee Finals, with sides having battled through two group stages at the end of the regular season to reach the Finals.

Saturday April 11 will have the semi finals at 1.00pm and 5.00pm with the highest seeded qualifier in the first semi final. Sunday’s grand final will face off at 1.00pm.

Weekend tickets will be priced at £25 for adults and £15 for concessions with a contribution from each ticket sold being returned to the selling club. Tickets will be on sale from 10am Friday February 14 via Ticketmaster.co.uk, with direct links for each of the clubs in the Division to track sales. Links will be live on Friday morning at www.eiha.co.uk/tickets.

For teams in NIHL South 1, their playoffs begin with a two-legged quarter finals 1v8 2v7 3v6 4v5. The four winning teams from the quarter finals will head to Bracknell for the Britton Finals weekend.

The semi finals on Saturday April 11 will face off at 3.15pm and 6.45pm. The highest seeded finalist will play in the first semi final. The grand final is on Sunday April 12.

Britton Finals weekend tickets are priced at £25 for adults and £15 for concessions. Individual day tickets may be available nearer to the event. Tickets will be sold from the Bracknell Ice Rink on Hornets match nights or online at https://bracknellhornets.com/britton-playoffs-tickets/ from 10am Friday.

An NLMG spokesman said: “The full detail of all NIHL Championship Series events is now published and we can’t wait for the Finals to come around.

“We are delighted to head back to Bracknell for Britton Finals, the JNLC have done us proud in the past two seasons hosting the Wilkinson Finals and now the venue has stepped up to the plate for the Britton division.

“Ice Sheffield is a great venue with the Bauer Arena hosting the Moralee Finals in previous years as well as numerous EIHA showpiece events, it’s the perfect venue for our North Division 1 clubs to celebrate the end of their season.

“The NLMG are extremely grateful to all of our host venues for their help and support, and we look forward to an exciting end to the NIHL season.”

All tickets for NIHL 1 and 2 Finals – Sheffield, Bracknell, Widnes and Alexandra Palace – will go on sale from 10am this Friday, February 14. See www.eiha.co.uk/tickets for all direct links to purchase Finals tickets.