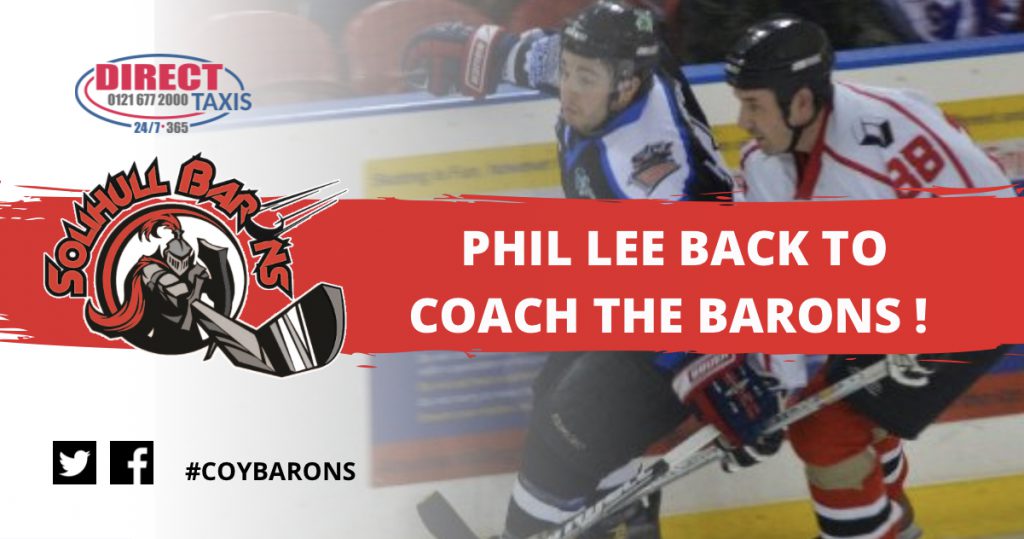 The Solihull Barons are delighted to announce the return of Hobs Moat legend Phil Lee to the set-up as he takes over head coaching duties ahead of the 2022-23 season.

For those who have followed the Barons for some time ‘Leepy’ will need no introduction. A north-east native, he began his career with his local side the Billingham Bombers before joining the Barons D in 1986-87. Bar a few years away from the game or playing with the Sheffield Steelers or Romford Raiders, Lee would be a fixture at Hobs Moat for the next few decades before finally hanging up the skates at the end of the Laidler Championship winning 2013-14 season.

A no compromising D-man, Lee was a demon with the shot from the point and sent many a charging forward cartwheeling through neutral ice with his infamous hip-check, while his rangey frame and long reach protected the ice in his own end. With over 450 games played in a Barons shirt, he is comfortably top of the table for games iced, and also features in the Barons all-time top 5 for assists, points and penalty minutes. More recently, his son Ben has featured between the pipes for the squad.

Phil was delighted to be offered the chance to take on coaching duties at Hobs Moat :

“I am thankful for the opportunity to take on the coaching role with the Solihull Barons.

My last involvement with the Barons was in 2014 when I decided to retire from playing/coaching. However my interest and passion for the game continued and I have enjoyed watching the Barons over the past few years.

When I was approached to ask if I would consider this role I found it an easy decision, and I am looking forward to the new season ahead.

I am grateful to be given the opportunity to be part of the club that has played such a large part of my life and hopefully we can build on the tremendous efforts of last season. “

Meanwhile Barons chair Dave Hayward was delighted to secure the services of Lee :

“When Callum called me a few weeks ago to tell me that after much soul searching he had decided to stand down as the Barons Head Coach I was disappointed but could empathise with his circumstances and it was the right thing for him to do despite this creating a problem for us as a club.

Problems however present opportunities and in this case I thought about how we could bring our clubs community spirit to the fore in search for a new head coach. When considering potential candidates we first looked internally within the club where we have a number of talented young coaches but the time is not yet right given their own circumstances for them to step up so I widened the net but still within the Barons family.

As a result I am absolutely delighted that Phil ‘Leepy’ Lee has agreed to become our new head coach and I thank him on behalf of the club for stepping up. As many Barons fan know Leepy holds the record for number of appearances for the club and if you chopped his arm off like a stick of rock it would say ‘Barons’ down the middle.

He has a wealth of playing and coaching experience that will be invaluable in bringing a new team together, some of the current Barons players were both coached by and played with Leepy in previous years.

Leepy is working hard behind the scenes building the roster for the 2022-23 season and I look forward, as I’m sure we all do, to player announcements in the coming weeks.

Once again thanks Leepy for stepping up and welcome back to the Barons family.

We are sure the Barons support will be delighted to see the return of Leepy and seeing the squad and approach he builds. With the coaching set-up now confirmed, keep following over the next few weeks for further updates on signings and plans for 2022-23 !

Come on you Barons !