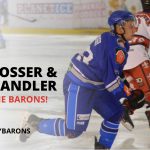 The Solihull Barons have added to their options with the signing of a pair of new names to the roster in the form of experienced players Sam Chandler and Sam Prosser.

In 30 year old Chandler, Phil Lee has brought in a utility plater capable of playing both forward and D, who brings with him experience of playing through junior and university hockey before a senior career centred on Coventry NIHL but with a season in Milton Keynes. He also guested for a single game last season with the Barons, away at Whitley.

“Sam is a utility player as he plays both forward and defence making him a valuable asset to the team, and I may have to call on his ability to play both this coming season. He has a great work ethic at training and in games. Sam previously played for Coventry NIHL Blaze and Milton Keynes Thunder and last season helped out the Barons for a game and made a great impression. Welcome to the team Sam.

For Chandler, a chance to make a full time step up to the Barons is one he is relishing : END_OF_DOCUMENT_TOKEN_TO_BE_REPLACED 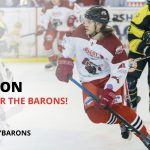 Niklas Ottosson is back for another year with the Barons !!! The dynamic Swede returns to Hobs Moat and will be expected to be a leading figure on the top forward line over 2022-23. Undeniably one of the most skilled players in the league, Ottosson combines silky stick handling with considerable awareness and vision in a package which saw him average a goal a game, while contributing to two more through 2021-22.

Bringing back Niklas’s skills to Solihull was essential to Phil Lee : END_OF_DOCUMENT_TOKEN_TO_BE_REPLACED 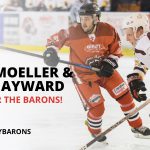 The Solihull Barons continue to grow the 2022-23 roster with re-signing of both James Moeller and Andy Hayward, a pair of players capable of contributing at both ends of the ice.

In Moeller the Barons have a versatile player capable of use as both a forward and in D giving Phil Lee flexibility in terms of lines over the course of the season.

“I am pleased to have Moeller returning for next season. His energy and enthusiasm will be beneficial to the team. Hopefully this year we can utilise both his forward and defensive skills to good effect, whilst building on his great attitude and work rate and furthering his development. Welcome back Moeller!

For James, the chance to play a part of the Barons under the massively respected Phil Lee was a big bonus encouraging his return to Hobs Moat for another year. END_OF_DOCUMENT_TOKEN_TO_BE_REPLACED