With the sides’ league positions more or less decided, Sunday’s TC Cars Solihull Barons v Solway Sharks game may not have been too much about the points but with the sides due to match up in the first round of the playoffs the Barons win may prove psychologically crucial.

It would be the Barons Marcus Maynard who would be the first to find the net a little shy of the first period, five minute mark after the Solihull number 3 shot a long distance effort through traffic for the opener. A little over a minute later and the home side had doubled their advantage, Luke Brittle taking time to on the powerplay to place his shot deftly in the space to the left of Calum Hepburn in the Solway net. The visitors were however quickly back on the counter and rapid break up the ice by Solway saw Jordan Buesa and Joe Coulter combine for the Sharks first taste of the Barons net.

The remainder of the first period would be finely balanced with both sides playing a positive attacking game but with no further scoring.

Into the second and the sides continued to trade attacks but again with neither side able to translate offence into goals. With three minutes of the period to go and the Barons on the penalty kill it would be Solihull who found the net as Tom Soar robbed the Sharks of the puck in the Barons end and raced up the ice, before skating across goal and slipping the puck deep into the Solway net. Two minutes later and Niklas Ottosson would get the Barons fourth goal with a delicate backhander to round Hepburn’s out-stretched leg.

If the Barons intentions had been to sit on their three goal cushion and see out the final period, the Sharks clearly had other ideas. Ross Murray for the visitors snatching the puck through Josh Nicholl’s five hole direct off of a Struan Tonnar face off win two minutes into the period. Less than a minute later and the Shark’s Marek Charvat got Solway’s goal number three with a blue-line bullet from the left hand boards leaving the Baron’s comfortable cushion looking far less well upholstered than it had been.

For much of the rest of the final period the Baron’s struggled to get the puck out of their own end as the Shark’s pushed for the equaliser but with the clock ticking down Tom Soar for the Barons sneaked goal number five for Solihull to confirm the win and slightly tilt the psychological odds ahead of the play-offs against the Scottish side in a fortnight.

The Barons conclude their 17/18 Moralee league fixture list this coming weekend when they welcome the Blackburn Hawks to Planet Ice Solihull on Sunday evening. While, for the Barons, with fifth place in the league confirmed, the points may be academic, it will be important to go into the following weekends first round of the play-offs on a high. For the Hawks however there is still the opportunity to snatch sixth place and improve their play-off seedings. Face-off 6:00pm Sunday 11th March.

Man of the Match awards sponsored by TC Cars Limited. 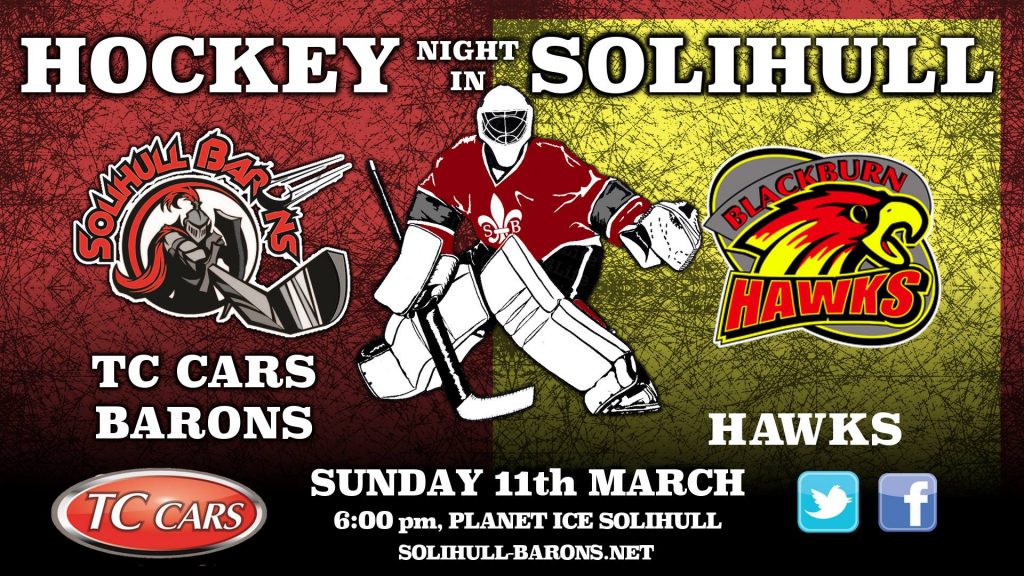