The highly anticipated grudge match between long time rivals TC Cars Solihull Barons and Telford Tigers lived up to expectations, but ultimately saw the Barons defeated despite a spirited display.

In a tightly contested first period of high quality there was little to choose between the two sides, with the Barons striking first through Philip Mulcahy to the delight of the home crowd after 5.21 minutes.

Telford had shaded the opening minutes, despite being a goal down, but cheered on by a vocal away support they drew level with Joe Miller finding the net after sustained pressure in the twelfth minute.

Goalie Daniel Brittle made a string of superb saves to keep the scores tied, with Solihull forced to play on the counter attack, but the Barons showed great spirit to and determination to finish the first period tied.

The second period started as the first finished, with the Barons’ net breached for a second time after 22.58 minutes by Daniel Mitchell.

The Tigers were demonstrating why they are reckoned to have the best top line in the division, however the Barons stood firm and weathered the storm cheered on by a home crowd of more than 300 fans. As the period progressed the Barons grew into the contest once again and were seeing more of the puck, with Niklas Ottosson consistently driving at the Tigers from deep.

The Barons got their reward with Marcus Maynard scoring from close range during a Power Play after 25.14 minutes to make the score 2-2.

The Tigers soon eliminated the predatory danger displayed by Ottosson, and after he suffered several big checks, left the ice following a knock.

Solihull continued to threaten the Tigers’ goal but suffered a penalty after Edward Eaton was penalised for tripping. With the Barons a man down Jack Watkins picked up the puck from deep and snaked past two Barons defenders before beating Brittle with an accurate finish to make it 3-2.

Despite falling behind once again, Solihull demonstrated impressive resolve and team spirit with Luke Brittle equalising on 31.30 minutes.

As with the first period, the Barons were forced to defend and play on the counter attack for the remainder of the second period, but held out to finish the period 3-3.

Roared on by the home support, the Barons came out for the third period but without the influential Ottosson they carried less threat and were visibly feeling the affects of their extensive efforts in the previous two periods.

The Tigers were seeing more and more of the puck, and took control of the match. Solihull Barons continued to battle away with tremendous commitment and will, but when Richard Plant slid the puck to Jonathan Weaver he scored with a fine shot from range to make it 4-3 after 45.41 minutes.

The ex EPL team demonstrated their big game experience and continued to control the tempo, and were happy to let the game become a physical and scrappy affair.

As the Barons pressed harder for the equaliser, big checks and skirmishes became frequent with Maynard leading his team into the physical nature the game had adopted.

In the final minutes Solilhull were looking more dangerous, but with the equaliser remaining elusive, the goalkeeper was sacrificed for an offensive player. The move was to prove unrewarded with Telford’s Jason Silverthorn winning the puck and breaking free from deep before sliding it into an empty net on 59.44 minutes.

The match finished 3-5 to the visitors, but the Barons can take great encouragement from their battling display and ability to stay in the match.

Their next home match in the Moralee campaign sees them face Nottingham Lions on October 8. 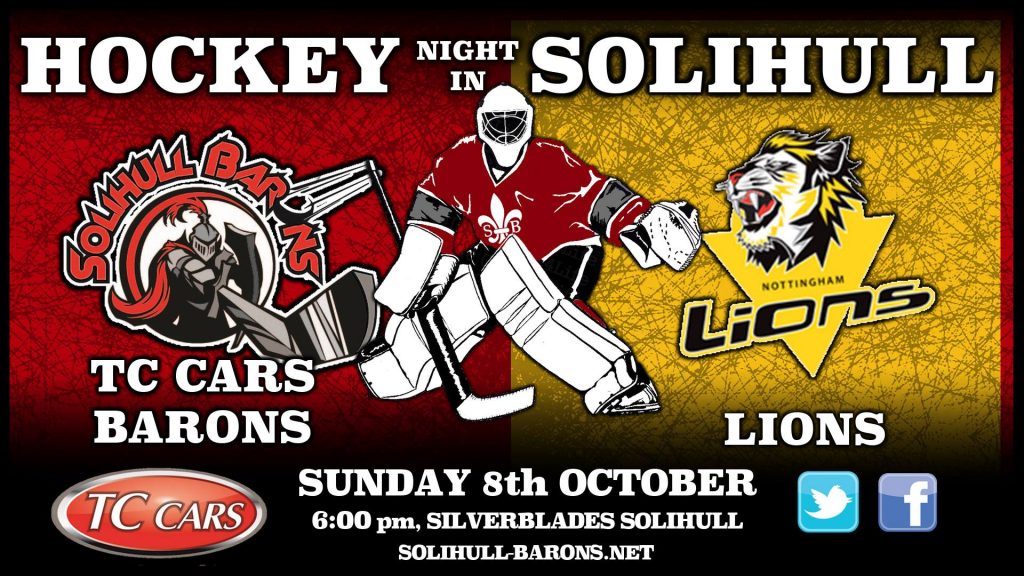