“Wow – just wow !”, “What a way to win !”, “Just the best game…” – the TC Cars Solihull Barons support streamed out of the Hobs Moat Road ice rink on Sunday evening reflecting on what was a real showcase for the sheer entertainment of National League Ice Hockey and for the efforts of a Barons side denied too often this season.

The TC Cars Solihull Barons turned in a massively impressive performance in a thrilling nail-biter on Sunday evening, taking the points and the win from the Hull Pirates and shaking off a run of narrow losses.

The first period got off to a very good start for the Barons as Niklas Ottosson rang the pipework on the way to the Solihull opener with the game less than a minute old. The Barons would continue to press the Hull net with some exciting play while the visitors also took their chances, Jason Hewitt with the equaliser on eight minutes as the puck trickled over the line despite goalie Josh Nicholls efforts.

The Barons then raced to a 3-1 lead as the Niklas Ottosson, Luke Brittle, Tom Soar line combined for a pair of goals in the eleventh minute. The visitors did not take kindly to this and some handbags ensued which seemed to galavanise the visitors somewhat as they struck back first via Sam Towner and then a converted powerplay from Jason Hewitt for his second of the evening. With a minute of the first period to go Matty Davis lofted the puck into the top left of Solihull’s net to nudge the visitors ahead for the first time.

The Barons countered quickly in the second, Ed Eaton with a sweetly taken short-handed breakaway in the first minute, to bring the sides level once more before a James Archer shot bounced off of Nicholls stick and into the Barons net to put Hull back into the lead and signal a spell of Hull scoring with both Bobby Chamerlain and Jason Hewitt finding the net to give Hull a three goal buffer.

The Barons heads stayed up and a shot from the right hand point by Ryan Selwood pulled the Barons back to two behind, before Luke Brittle netted from close in, in the final minute of the period to see the sides head to the dressing room 7-6 in favour of Hull.

Two minutes into the final period and the Pirates cushioned their lead with a Bobby Chamberlain goal for Hull’s number 8. Solihull refused to give up and a brace from Otttosson levelled things up with four minutes to go. A tense final few minutes of regulation time ensued as both sides frantically pushed for the winner while trying to keep the defence tight to secure at least a point for the full-time draw.

With the buzzer sounding with the sides still level on 8-8, 5 minutes of 3 on 3 overtime was called and while this provided thrilling excitement for the vocal support no further goals were scored, with the result decided on penalty shots.

With Josh Nicholls in the Solihull net denying Hull either of their first two attempts, and with Josh Bruce’s successful effort giving the Barons the initiative, it fell to Phil Mulcahy to secure the win for the Barons giving the home side a well earned and much deserved win and the two points which came with this.

The Barons are once more on home ice this Sunday against the Dragons. The two sides met in the preseason with the Barons emerging comfortable winners but league performance against the North Wales side have always been much closer and a tight tussle is expected as both sides vie for the points. 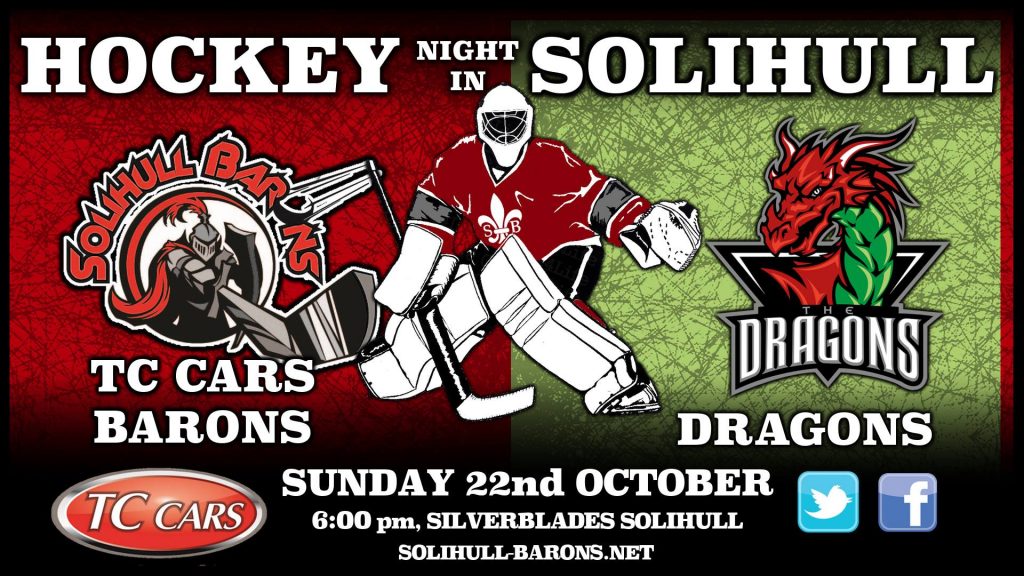