The Direct Taxis Solihull Barons put on a tremendous show in a thrilling, 17 goal, end to end tie on Sunday evening but despite leading for much of the game, the team lost out to a Solway goal in the dying seconds of the game breaking the hearts of the loud home support while sending the Sharks into near trophy winning celebrations such was the intensity of the match.

Five minutes were on the clock when the Barons got the first goal of the night, Niklas Ottosson finding a path through a crowded goal mouth for the opener. The Barons second was just after the 12 minute mark as a double powerplay ticked down, a long range Niklas Ottosson shot was parried but the quick reacting Callum Bowley tapped in the rebound. The added comfort of a two goal cushion lasted less than a minute as Callum Boyd for the Sharks placed the puck in the net within the minute. Richard Slater however showed pace and precision in the 17th minute with a break up the ice and a sweetly taken one timer became Solihull’s third goal and restored the two goal buffer going into the second.

The Sharks pulled a goal back six minutes into the second as Peter Gapa dispossesed the Barons in their own end and fed an open Scott Henderson for the visitors second. The Barons however quickly countered as Tom Soar and Niklas Ottosson teamed up for the Barons fourth. A powerplay in favour of the Sharks shortly after, brought Solway back to within a single goal via a wrist shot by Gapa from the right hand half boards. The goals were rattling in and the Barons tilted the see-saw again almost immediately as once more Soar and Ottosson combined, this time with Soar getting the last shot. Still the tit for tat scoring continued, this time via a powerplay, Solway’s Scott Henderson with a shot under Graham Laverick. With two and a half minutes to go in the second Callum Bowley restored the Barons two goal advantage…..but you know how the story goes by now, and with a minute of the period to go the Sharks Iain Bowie again pegged the Barons back to the single goal and a 6-5 scoreline heading into the final period.

Within seconds of the puck drop the Barons were back on the up as Niklas Ottosson finished off a well worked play for Solihull’s seventh. As ever, the Sharks came back, Bowie with their sixth, six minutes into the final period. The scoring pattern of turn about goals was broken with 8 minutes to go as Solway drew level for the first time in the match Ben Coughtrie slotting home past a supine Graham Laverick and then the visitors shot into the lead a minute later after a marginal call put the Barons onto the penalty kill, Gordon Home with the go-ahead goal. The Barons were not out however and when they found themselves on the powerplay with four minutes left on the clock as soon as the puck fell to Callum Bowley central on the Sharks blue line, the Barons player-coach floated the puck through traffic for the equaliser. Sadly for the Barons support, just as the game looked to be heading to overtime the Sharks got the final goal, a scrambled shot in the Solihull crease with a mere 3.5 seconds on the clock, much to the disappointment of the loud home support.

The Barons are back at Hobs Moat once more next weekend when they play host to the Sheffield Scimitars for the final time ahead of the play-offs. The sides have met three times in the league and twice in the cup thus far, with the Barons coming out on top in all bar one of these ties. That one defeat however was a thumping at home in an early season cup match and while this was clearly the exception, it shows the Barons will still need to be on form to bring home the points.

(Barons Man of the Match, Niklas Ottosson, had been given a match penalty in the dying seconds of the tie and so was off the ice and unable to collect his award) 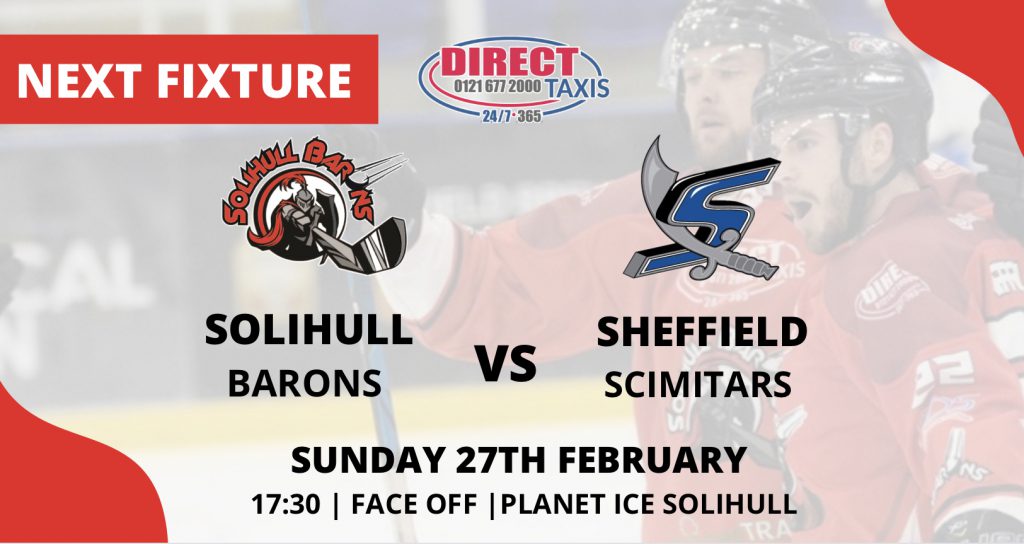