The TC Cars Solihull Barons rounded up a four point weekend with victory in a closely fought tie against the Blackburn Hawks on Sunday evening. The Hawks have had a poor season by their standards but have shown what they are capable of with victories over quality opposition, including the Solway Sharks and Telford Tigers, this season and the Barons needed to delivery a solid game on the ice to get the win.

Following a delay to the game early on while Hawks D-man Steve Duncombe was treated following a puck to the face, the first period showed that the sides were evenly matched with the Hawks opening the scoring after seven minutes courtesy of James Neil. A thirty second spell twelve minutes in saw the Barons first of all draw level courtesy of a Stephen Heape powerplay effort, before taking the lead as scoring partners Tom Soar and Niklas Ottosson combined to give the Barons their second goal.

The Barons further extended their lead early in the second period as Luke Brittle scored his second short handed goal in as many games with a solo effort on the 26th minute. The extra padding offered by this two goal advantage was short lived for the Barons, teenage hotshot Kieran Brown of the Hawks pegging things back before teammate Richard Bentham tied things up three apeice with a powerplay goal on the half hour mark. By the end of the period Solihul had once more eased out their lead courtesy of Luke Brittle once more, together with a goal by Barons captain Josh Bruce on the powerplay just before the end of period buzzer.

The Hawks however were very much still in the game and Kieran Brown once again showed his quality to cut the Barons lead to a single goal a minute in to the final period. The two sides traded attacks but with three and a half minutes to go Robert Streetly fired in an equaliser for the Hawks and the very real prospect of the Barons second overtime game of the weekend looked to be on. Matt Maurice obviously wanted home early however and gave the Barons their game winning goal in the final two minutes of the game – despite some contention as to whether the puck was high sticked into the Blackburn net.

Solihull have a tricky weekend coming up with away ties to both the Sheffield Steeldogs and the Billingham Stars before returning to home ice on the 4th of March against the Solway Sharks. Face-off 6:00pm. 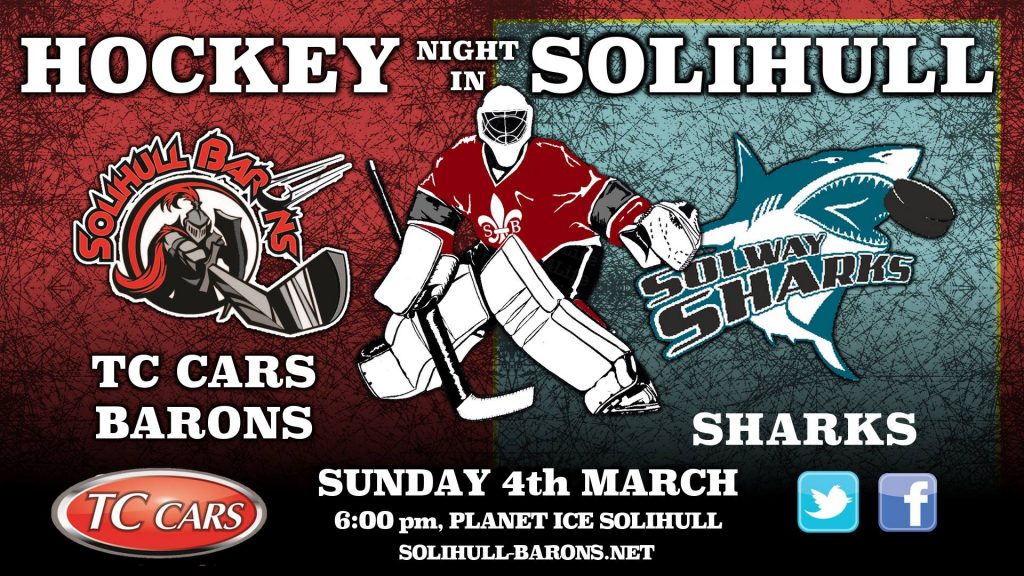