The TC cars Solihull Barons put in a strong performance on Sunday in their final league game of the season to emerge victorious over Blackburn Hawks, clean sweeping the Lancashire side in this years Moralee Conference. With league positions decided for both sides, the points for the victory were of minor importance but with play-offs starting in less than a week keeping the wins coming was important.

The opening ten minutes of the tie saw no scoring but with the Hawks generally carrying the bulk of the play as Solihull struggled to generate sustained offence. This initial spell was however broken by a fight as Baron Steven Heape and Hawk Corey Stones tangled after 4 minutes. As the period ticked on the Hawks pressure started to tell and a race up the ice by the visitors culminated in Blackburn forward Josef Istocy firing the puck into the roof of the Solihull net for the visitors opening goal. By 16 minutes this lead had stretched to three, Kieran Brown and Istocky once more doing the damage.

This seemed to be a bit of a wake up call for the Barons and immediately off the restart following the Hawks third goal Adam Brittle raced up the centre of ice before lofting the puck over Niks Trappan’s shoulder and into the Hawks net to get Solihull onto the scoreboard. Less than 30 seconds later and Josh Bruce cut the Hawk’s lead back to a single goal and this was almost immediately followed by a Tom Soar effort to bring things back to a balanced scoreline heading into the second.

By the second the Barons had started to hit their stride and Trappans was doing a solid job, working up a sweat in the Blackburn net against continuous Solihull pressure. This pressure was converted when Tom Soar got his second goal of the evening putting Solihull into the lead for the first time with a calmly taken back post tap in off a precise Phil Mulcahy feed.

With no further scoring in the second. the sides headed into the third split by a single goal and while the Barons continued to dominate play it took until the final five minutes for Solihull and the home support to breath easier. Dave Rogers spotted Elliot Farrell in space in the neutral zone and his break out pass allowed the young forward to race up the ice unopposed to get the Barons fifth and final goal to secure the win.

The Barons focus now turns to the first round of the play-offs this coming weekend when they will take on the Solway Sharks. In what will be a two-leg quarter final, the Barons travel to Dumfries on Saturday with the two sides meeting in Solihull the following evening. While the Sharks have had the better head to head performance over the season, the Barons took home the points in their most recent clash and a very close battle is expected. Face-off 6:00pm.

These results confirm the Sheffield Steeldogs as the 2017/18 Moralee Conference league champions.

All at the Solihull Barons would like to congratulate them on their title.

Please note that this is a non regular season play-off game. Season tickets are not valid for this tie and you should enter via the main entrance.
The season ticket holder and sponsor lounge will however still be open for all your normal refreshments (and warmth !) 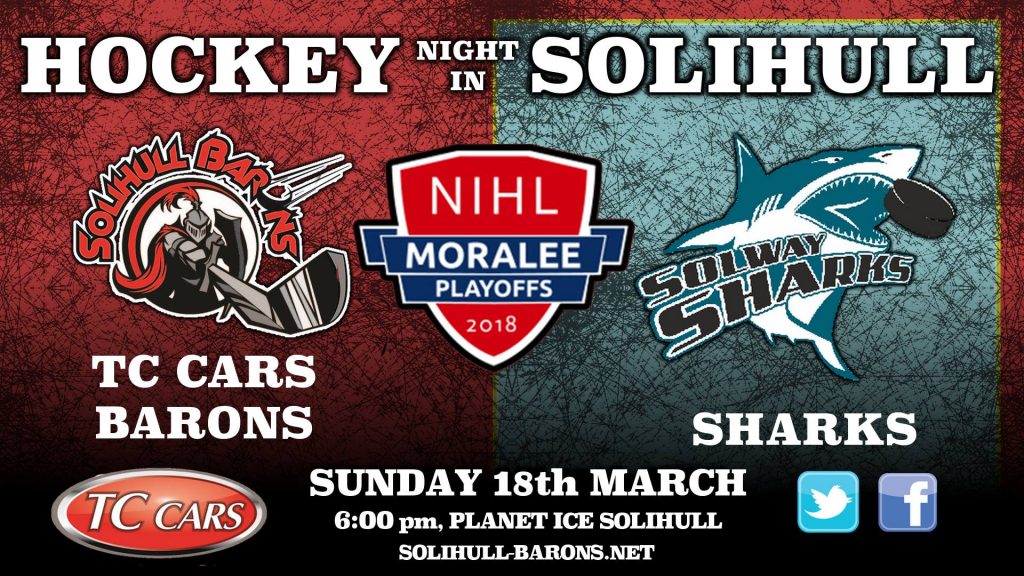