The Direct Taxis Solihull Barons have secured their place in the Moralee Cup semi-finals with a final period demolition of the Blackburn Hawks in a tie which confirms the Barons as topping the Midlands qualifying group. This win sets up a two-legged semi-final against the runner-up in the Northern group over the weekend of the 11th and 12th December.

Against the Hawks, the Barons found the net within the first couple of minutes of the tie – a fast break by Niklas Ottosson down the right hand wing was squared back to Dan Mulcahy who fired home from 3 metres out. Callum Bowley eased out the lead on the powerplay after 6 minutes, the Solihull forward slotting the puck in deftly on the glove side from just shy of the goal line line, after looking as though he was going to round the net. While the Barons were generally ahead on the play there would be no further scoring and the teams would head to the dressing rooms with Solihull maintaining a two goal lead.

The Hawks would counter quickly in the second – with less than thirty seconds on the clock Jacob Lutwyche threaded the puck through a crowded goal mouth to get the Lancashire side on the scoreboard. The Hawks would be the side on the up for much of the first half of the middle period, preventing the Barons from sustaining pressure on the Blackburn goal while making Sam Hewitt work hard at the other end of the ice. The Barons would however be next to score, Paul Stanley sprinting up the left wing before crossing to Andy Whitehouse to restore Solihull’s two goal cushion. The plumpness of that upholstery thinned quickly however with the Hawks countering after a little more than a minute, Lee Pollitt with the goal. Matt Maurice rapidly pushed the Barons lead out once more, waiting in space, he made the most of a Callum Bowley feed as the no 72 balletically circled through the Hawks defence to create the opening for Maurice.

Into the third period and the Barons 5th came on 44 minutes courtesy of Matt Maurice, his pass from behind the net being deflected in by the skate of Hawks goalie Michael Rogers. A minute later Tom Soar pushed the advantage out further with goal number 6. With 8 minutes of the period to go Callum Bowley got the Barons 7th off of a feed from Tom Soar up the right hand wing. The goals kept coming for the Barons, a partly smothered Paul Stanley shot trickling in under the Hawks goalie for number 8, while Callum Bowley made the most of Barons pressure for number 9. Dan Mulcahy topped and tailed the Solihull scoring taking the Barons into double figures in the final couple of minutes of the tie.

The Barons are off to Tyneside next week for what should be a closely contested tie against the Whitley Warriors on Sunday. They will then return to home ice on the 21st November when they play host to the Billingham Stars in a league tie. 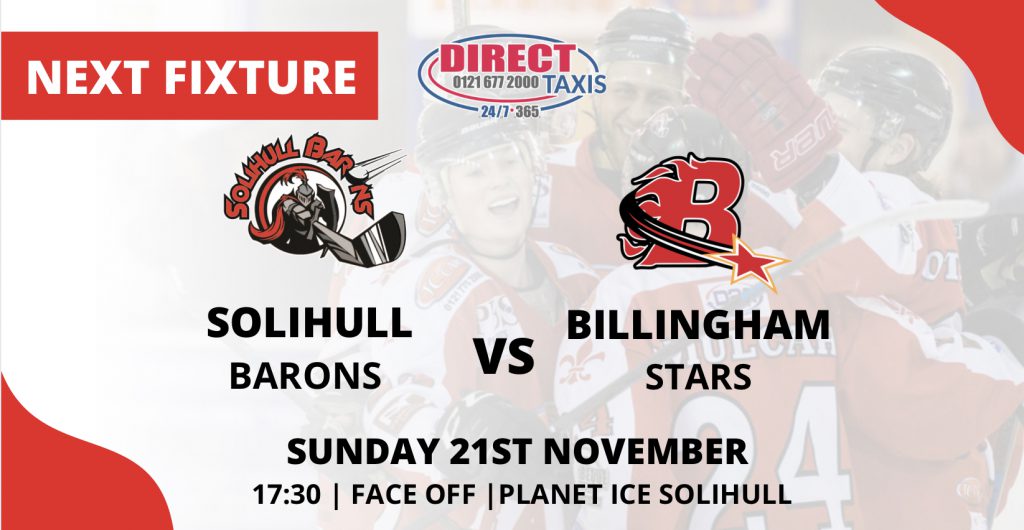